Welcome to the Gendarme Path

The Gendarme Path is one of Denmark's most beautiful hiking routes. The 84-kilometer coastal hiking route is divided into five day-stages: the Mountain stage, the Brick stage, the Crow stage, the Beach stage and the Mill stage. Each stage meanders along the shores of the fjord and thus offers a varied and sometimes hilly landscape. On the hiking route, you have many opportunities to experience rare plants and animals as well as many interesting biotopes and landscapes - from orchids, frogs and birds to tunnel valleys, cliffs and stone reefs. At the same time, you can explore the history and the many myths and legends associated with the Gendarme Path and the borderland.

Gendarme Path - then and now

As you follow the Gendarme Path, it is not hard to imagine how the border gendarmes kept both eyes and ears open as they walked their steady routes on foot along the steep slopes, through the secretive forests and along the flat beaches. Their task was to keep an eye out for smugglers who tried to bring goods into or out of the country without paying the duty that for centuries was one of Denmark's most important sources of income.

The Border Gendarmerie was formed in 1839 to protect customs officials at the border of the duchies along the River Elbe. After the defeat against the Germans in 1864, the Danish border moved north to the watercourse “Kongeåen” - and in 1866, the gendarmerie moved with it. At the Reunification in 1920, the border gendarmes moved south again and patrolled along the current border from the Wadden Sea to the west to Als ’southern tip to the east.

In 1958, border control passed to the police, and the gendarmerie corps was history after more than 100 years of service. However, fragments of the Gendarme Path were still there, and in the 1980s the historical path was once again opened to the public..

What does ”Gendarme” mean?

The word "gendarme" is used in many countries, but can be traced back to the French "gens d'armes", which means "men under arms". The French gendarmes were elite soldiers and served in the 15th century as bodyguards for the king. Since then, their tasks evolved to include assistance to the police in critical situations. 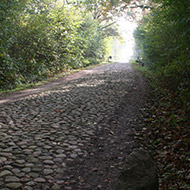 The Mountain Stage from Padborg to Sønderhav

The first stage of the Gendarme Path is named the Mountain Stage. As the name suggests, it is on this part of the route that you encounter the most hills - from the hills of the stream “Krusåen” to the view hill high above Kruså and up and down along the steep and slopes of the forest “Kollund Skov”. 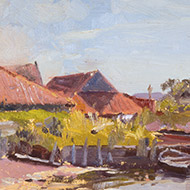 The Brick Stage has been named after the area's previously thriving brickwork industry. Like pearls on a string, the brickworks lay along the coast, and you will still find many traces in the landscape after them. 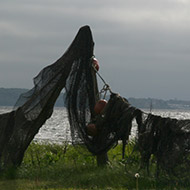 The Crow Stage has been named after the landscape ”Kragesand” – or perhaps after the Danish proverb, it is so distant that even the crows turn… 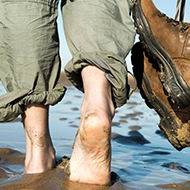 The Beach Stage on the Gendarme Path leads you past some of the best beaches along the hiking route - from the child-friendly beach “Vemmingbund Strand” to Sønderborg city’s popular beach “Sorte Strand”, both beaches has the famous Blue Flag.

The Mill Stage has been named after the landscape ”Kragesand” – or perhaps after the Danish proverb, it is so distant that even the crows turn…